Skip to content
Posted in How To By Jie QiPosted on December 1, 2014April 17, 2020Tagged advanced circuits 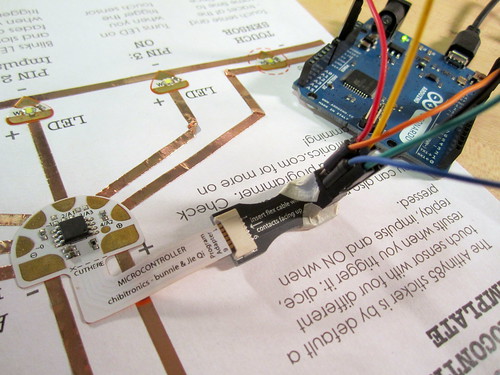 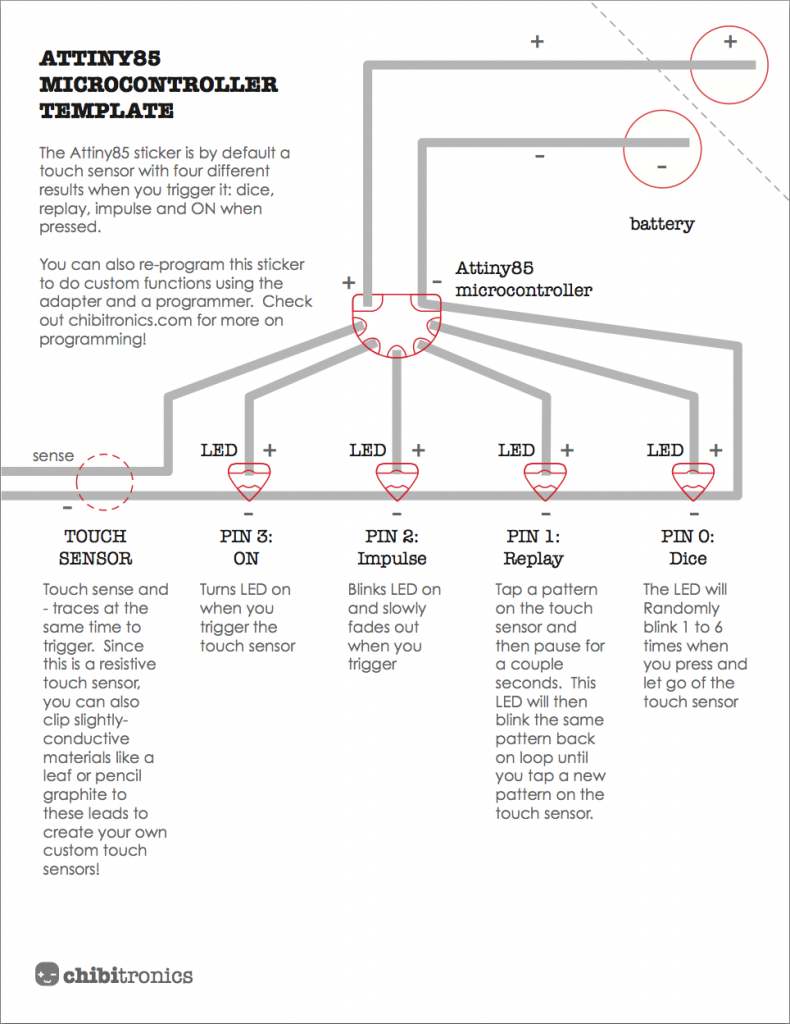 For a more detailed tutorial on Attiny support installation, check out “Programming in Arduino” section of Sparkfun’s Attiny Programmer Hook Up Guide.

STEP 3: TAPE YOUR PROGRAMMING ADAPTER
To prevent potential short circuits, put a bit of non-conductive tape on the bottom of your circuit sticker programming adapter.

STEP 4: CONNECT YOUR PROGRAMMER TO THE ADAPTER
You will need to connect your programmer to the Circuit Sticker programming adapter, which will then connect to the programming tail of the microcontroller sticker. The pinout of the adapter is: 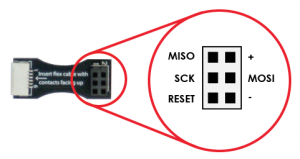 This step depends on which programmer you use:

STEP 5: CONNECT ADAPTER TO MICROCONTROLLER STICKER
Now you are ready to connect the microcontroller sticker to the programmer!

If you are using the Tiny AVR Programmer or the Arduino ISP, make sure to take the battery out of the test circuit first. Then, simply insert the programming tail into your adapter and plug your programmer into your computer: 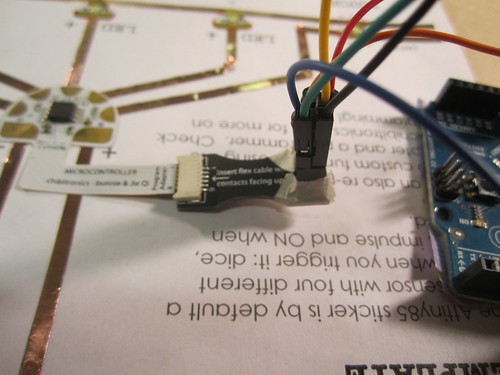 If everything is connected properly, the microcontroller should power on and run the default program. The lights will appear brighter because the circuit is now being powered by your 5V computer USB port instead of the 3V coin cell battery.

If you are using the AVRISP MKII, insert the programmer tail into adapter and plug your programmer into the USB port of your computer. Since this programmer does not provide power to the microcontroller, you will also need to add a fresh coin cell battery to your test circuit. Without battery power, the AVRISP will shine a red light (left). Once you put in a fresh battery, the light should turn green (right).

STEP 6: CONFIGURE ARDUINO FOR ATTINY85 AND PROGRAMMER
Next you will need to choose the correct settings in Arduino for the Attiny85 and your programmer:

STEP 7: UPLOAD YOUR PROGRAM!
Now you’re ready to upload your own code! To get started, let’s try making changes to some existing code: 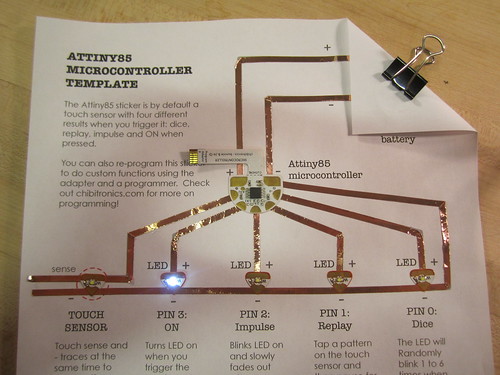 TRY THIS: LEDS BLINKING IN SEQUENCE
Here is some code that will make the LEDs blink in sequence:

// the setup routine runs once when you press reset:
void setup() {

// the loop routine runs over and over again forever:
void loop() {

Copy and paste this code into the Arduino window and upload directly. Try playing with the delay times to create different blink rhythms! You will need to modify your test circuit by adding one more LED on Pin 4, where the touch sensor used to be, like this: 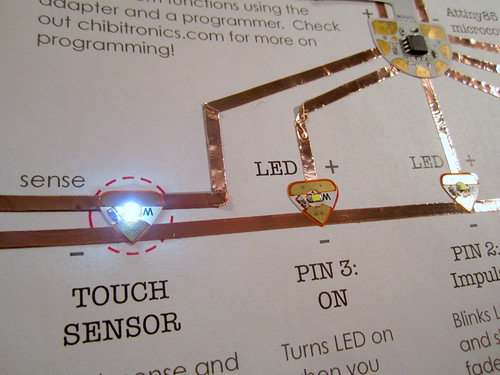 WRITE YOUR OWN CODE!
The following Arduino commands should be supported:

These are the pinouts for the microcontroller sticker and Attiny85:

Note: there is a 4 megaOhm resistor between Pin 4 and + on the microcontroller to create a resistive touch sensor.

For additional sample code, check out the examples at the bottom of this page